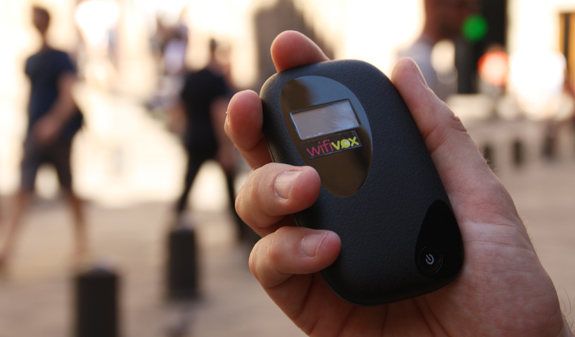 Wifivox has just launched its Affiliate Program for blog publishers and web owners.

Wifivox affiliates can earn 15% revenue on every referred purchase. Our affiliates will also be able to login into their personal Affiliate portal and check the status of their pending comissions, incoming traffic, reports and more.

We also offer a 30-day affiliate cookie, meaning that customers renting a Wifivox unit up to 30 days after the first visit to our affiliates sites will still count as an affiliate comission.

If you want to sign to the Wifivox Affiliate Program just follow this link and fill the subscription form.

We’re looking forward to hear from you very soon!

Posted by: Wifivox
November 28th, 2014 in Corporate
Black Friday deal: 30% OFF in your rental!

Take advantage of our Black Friday deal! Save 30% of your rental cost using the following promotional code: BLKFRD14

The promotion will be valid until 23:59 hours of today (Spanish time).

We are happy to announce we recently signed a collaboration agreement with Catalunya Convention Bureau, a programme created by the Catalan Tourist Board to promote Catalonia as a leading destination in the tourism sector for meetings, conferences and conventions.

Catalunya Convention Bureau acts as an intermediary between the Catalan Tourist Board and all the companies that provide services to the activities related with business tourism.

This year, CCB will be present in the most important MICE shows around the world, including Imex Frankfurt, EIBTM, Imex Las Vegas, among others.

Catalunya Convention Bureau will help Wifivox generate business around the MICE sector and strengthen our relationship with companies related to this sector.

Next month, between the 24th and 27th of February, the 9th edition of the well-known Mobile World Congress will take place in Barcelona. Thousands of professionals (around 75.000 according to the organization) will meet during 4 days in the city.

Being one of the largest tech conferences in the world, connection to the Internet is one of the top priorities for every professional attending the show. If you’ve visited Mobile World Congress in the past years, you might have noticed the poor performance of the Wifi network at the venue. Thousands of professionals using the same Wifi network at the same time caused choppy Internet connection. Even for companies presenting their new products and services the connection quality was a huge problem. Just unacceptable.

Wifivox will help you out with this problem. We will provide you with your personal Wifi Hotspot, with unlimited data where you can connect up to 10 persons of your team at the same time. You will suffer no more problems with the Internet connection. Besides that, you will still have an Internet connection when you move around the city, providing an excellent customer experience during your stay in Barcelona.

We have prepared a very special offer for all the MWC 2014 attendees: you will enjoy of a 10% discount in your pocket Wifi rental and FREE DELIVERY AND COLLECTION to your hotel or apartment in Barcelona. We want you to enjoy Internet connection without getting worried about anything else.

Use the following promo code in our booking form to take advantage of this offer: MWCWIFIVOX

Wifivox will be attending this year’s EIBTM show in Barcelona with it’s own booth in the Technology Area: O156.

The EIBTM Exhibition (The Global Meetings & Events Expo) opens tomorrow with over 15.000 industry professionals expected and over 3,000 exhibiting companies. The show will go on from 19th to 21st November with the top companies in the meetings and event industry showing their latest developments and services.

Wifivox will be located in the Technology Area in the stand number O156. Contact us to schedule a meeting or come to our stand (O156) to meet us.

Wifivox has recently signed a collaboration agreement with the official Barcelona tourism board: Barcelona Turisme. This is a strategical move towards the deployment of the Wifivox brand in Barcelona.

Thanks to this agreement tourists visiting Barcelona will be able to rent the Wifivox devices in any tourism office of the city as well as in the official Barcelona Turisme website.

We are looking forward to further strengthening our relationship with Barcelona Turisme and developing a successful collaboration in the long term.

You can check all the official Barcelona Turisme information points here or rent online at their site (www.bcnshop.com).

The CMT, the Spanish Communication Commission, has recently published the 3G service map for Spain. From the published data it can be extracted that an astonishing 97,7% of the Spanish population has 3G coverage today.

These results are a 7,6 points higher than in 2008. It is taken into account that the CMT only considers as 3G coverage when the speed is over 300Kbps.

In the province of Barcelona, where the Wifivox HQs are located, 3G coverage is one of the highest in Spain with a total of 99,5% of the population covered.The overall percentage keeps increasing year by year while the 3G networks keep improving in performance and speeds with the now limited 4G networks.

Wifivox relays on the most reliable 3G network in Spain with speeds reaching 7Mbps. As the device can be sent anywhere in Spain Wifivox provides a nation-wide solution for tourists visiting the country.

Dear customers, we are presenting today our Live Chat support. Until today we primarily used email, telephone and Twitter for customer support. As the Internet rapidly expands, people look for faster and more direct methods to contact support.

We have seen that most customers are looking for an extremely immediate response to their issues and questions. Live Chat support changed the way that many online businesses handle support, and we believe it is an asset to our customers.

Using Live Chat communication will enable Wifivox to take a more customer-oriented approach to handling support. Customers will get an immediate access to support, and we will be able to retain the major benefits of email support such as multitasking and history records. Customers can get instant responses of anything they would like to know both before the service and during the rental period. We have identified our goal with Live Chat as to help most customers solve their problems in a single chat session.

So whether you have a question in regards to general service understanding, some doubts related to the order or payment process, or issue during the rental process, Wifivox will solve it right away with Live Chat.

Here you have a selection of Spotify playlists we’ve created specially for you. Enjoy!

Sónar 2013 – Wifivox’s selection (13th June 2013)
A special selection of some of the songs that will be played in this year’s edition of Sónar Festival in Barcelona. (Pet Shop Boys, Kraftwerk, Skrillex, Justice, Jamie Lidell, Diplo, etc)

Read more 0
First
4.95 266
This website uses cookies to improve your user experience. In order to keep on using them we need your consent.AcceptReject